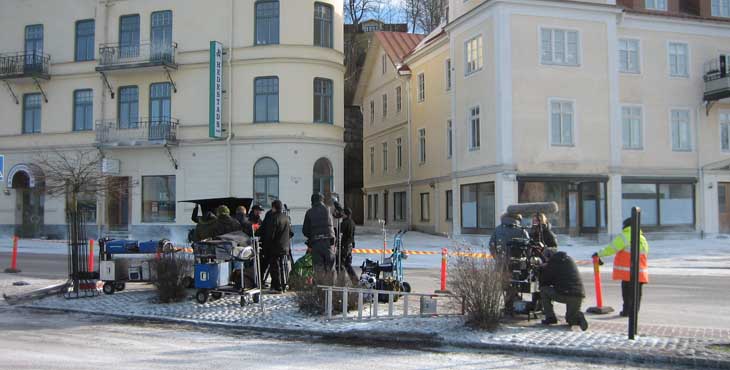 Gnesta became Hedestad when Stieg Larsson's book, The Girl with the Dragon Tattoo, was made into a film. The film premiered worldwide, and in Gnesta, on 27 February 2009.

For a few hectic days in February and April 2008, Gnesta became Hedestad when the film The Girl with the Dragon Tattoo was filmed. Hedestad is the rural town where Mikael Blomkvist, the main character, is staying during most of the book. It is also here, in Hedestad, that an event occurred several decades earlier that is significant to both the intrigue and the outcome of the story.

The municipality of Gnesta has mapped Mikael Blomqvist's route during his visit to Hedestad so that you can follow in his footsteps. Mikael Blomkvist, the main character played by Michael Nyqvist, arrives in Hedestad on an icy-cold day in the middle of winter. Because of the lack of snow in the winter of 2008, the film crew had to wrap Gnesta in a blanket of artificial, paper snow.

Preparations were extensive and time consuming. Once the area around the train station and Stora Hotellet looked sufficiently cold and covered in snow, Mikael Blomkvist could finally arrive. Stora Hotellet doubled as the premises for Hedestadskuriren, the local newspaper in Hedestad, for the film. The sign on Stora Hotellet was redone and the building itself was covered in a winterish facing for the first days of filming.

The winter holds Hedestad in a firm grip. In reality however, the winter of 2008 was mild with very little snow so the film crew had to cover Torggatan in artificial snow made of paper in much the same way they did with the area around the train station and Stora Hotellet. In the film, a young Harriet Vanger stands in the crowd watching the Children's Day parade in Hedestad in 1966. Soon thereafter she disappears without a trace.

What is the story in, The girl with the Dragoon Tattoo?

Journalist Mikael Blomkvist has lost a libel case and wants to escape the media frenzy in Stockholm. Henrik Vanger, an industrialist, hires Mikael Blomkvist to document the Vanger family history. In actuality however, Henrik really wants Mikael to take a closer look at the strange disappearance of his niece Harriet in the summer of 1966. Blomkvist takes the case and teams up with young, socially maladjusted computer hacker Lisbeth Salander. While digging through the Vanger family's past, they discover a darker, more violent past than either could have imagined.

The filming of Stieg Larsson's Millennium Trilogy was one of the largest film projects in the Scandinavian countries. Michael Nyqvist and Noomi Rapace portray the main characters, Mikael Blomqvist and Lisbeth Salander.
The film The Girl with the Dragon Tattoo was directed by Danish film director Niels Arden Oplev and produced by Yellow Bird, which co-produced the film together with Nordic Film, SVT and ZDF Enterprises. The film was distributed by Nordisk Film.