In the heart of Sörmlands culture surroundings 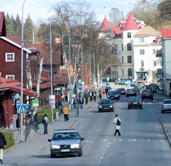 Gnesta is a young municipality with beautiful meadows in the gateway to the culture surroundings of Sörmland county. In wintertime there are around 10.600 inhabitants. In the summertime the population doubles due to all holiday cottages.

Gnesta is situated 65 kilometres southwest of Stockholm, the capital of Sweden. Gnesta is part of the Greater Stockholm labour market which means that many people commute to work in other municipalities — for example Södertälje and Stockholm.

You can reach Gnesta from Stockholm by car in 45 minutes. Gnesta has 35 daily connections with train to Stockholm. The traveling time is 40 minutes with regional train and in 60 minutes with commuter train. You can also easily reach Norrköping/Linköping, Örebro and Gothenburg from Gnesta with train. Skavsta airport in Nyköping is situated in less than one hours´ drive from Gnesta. Arlanda, the other big international flight hub, is 90 minutes away.

There are over 1100 registered companies in Gnesta, a majority of them are small- or medium-sized enterprises. The municipality itself is an important employer with around 700 employees. Some other major employers are Åsbacka-school, Rekal, Södertuna Castle, only to mention a few.

One of the municipality´s objectives for the business sector is to double the number of companies with more than 10 employees before 2015.

The planning unit is responsible for assisting existing business in Gnesta as well as establishment of new enterprises in the area. The department can also provide information about premises, land and prices.
At the moment it is possible to find land as well as premises well situated near the regional train station.

At the Municipality Hall

Other main population centres in the municipality are Björnlunda, Stjärnhov and Laxne.
Education: There are four public compulsory schools and one private school in the municipality. Gnesta has a co-operation agreement with nearby municipalities concerning secondary school education. Since the city of Stockholm as well as Eskilstuna is near by it is possible for students to commute to the universities in the region.